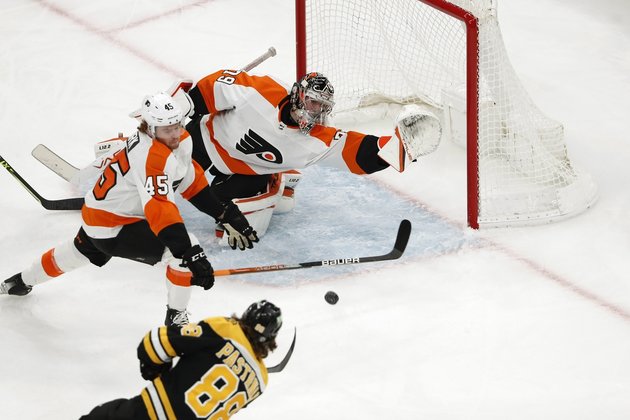 Pastrnak's trio of goals gave him 16, second on the team behind Brad Marchand's 19. The right winger's third goal, on a power play at 16:45 of the second period, broke a 2-2 tie to put Boston in front for good.

Rask made 25 saves in his season debut and first game since Game 6 of the Bruins' second-round playoff series against the New York Islanders on June 9, 2021.

The 34-year-old goaltender underwent offseason hip surgery and signed a one-year, $1 million deal to rejoin the Bruins on Tuesday.

Boston earned its season-high fourth straight victory and improved to 7-1-0 since resuming play after the league-wide pandemic schedule pause.

Cam Atkinson scored his team-leading 15th goal and Joel Farabee netted his 11th for the Flyers. Carter Hart stopped 33 of 36 shots for Philadelphia, which took its sixth consecutive defeat (0-4-2).

Pastrnak opened the scoring on a wrist shot in the slot just 1:51 into the game. He scored again on a power play at the 5:27 mark of the opening period, on a wrist shot from the right circle.

Atkinson's power-play tip-in of Ivan Provorov's shot from the top of the right circle cut the Flyers' deficit to 2-1 at 8:02 of the second.

Farabee tied it at 2-2 with exactly five minutes left in the middle period, finishing off a give-and-go with Atkinson with a backhander.

Boston defenseman Matt Grzelcyk missed the game after landing in the NHL's COVID-19 protocol before the game. One additional Bruins staffer also was placed in the protocol.

President Biden and the Democrats were highly critical of President Trump's foreign policy, so it was reasonable to expect that ...

AL-ULA, Saudi Arabia: Shedding light on the lives of the ancient inhabitants of Arabia, archaeologists from the University of Western ...

DUBLIN, Ireland - A father and mother who sexually molested their children and permitted them to be raped and abused ...

Number of births in China lowest ever

BEIJING, China: On Monday, statistics showed Mainland China's birth rate has dropped to a record low of 7.52 births per ...

5G cellular could be 'catastrophic' in aviation: US airline officials

CHICAGO, Illinois: According to U.S. airline officials, the introduction of a new 5G service could cause U.S. air traffic to ...

LONDON, England: The British Broadcasting Corporation (BBC) faces a major financial setback following a recent announcement by the government to ...

DUBAI, UAE: Auction house Sotheby's Dubai will sell a black 555.55-carat diamond believed to be from outer space, known as ...

At $534 million, Rome's Villa Aurora highest price ever at auction

ROME, Italy: Villa Aurora, a villa for sale in Rome with a starting price of $534 million, was expected to ...

Buyers warm to Asian stocks, major indices advance across the board

SYDNEY, NSW, Australia - Stocks in Asia were on the boil on Thursday with the major indices across the region ...

LISTIKOT, Nepal Traders importing goods from China complain about the delayed shipments by Chinese authorities. The shipments supposed to reach ...

Tesla looks to Mozambique to replace China for minerals

AUSTIN, TEXAS: In a first-of-its-kind deal aimed at reducing its dependence on China for graphite, Tesla is turning to Mozambique ...

Beasts of No Nation