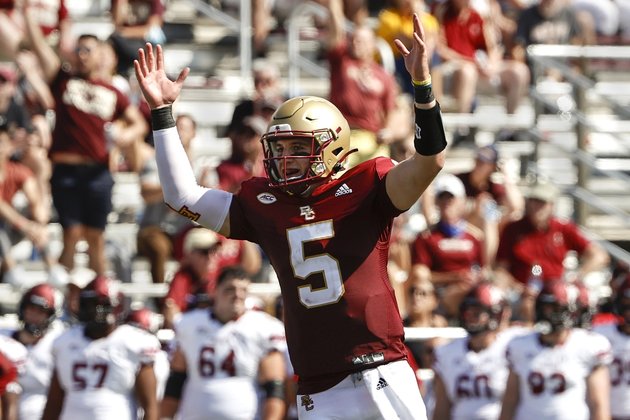 Boston College quarterback Phil Jurkovec underwent surgery on his throwing hand on Monday and could potentially miss the rest of the season.

Jurkovec injured his right hand during the first quarter of Saturday's 45-28 win over Massachusetts. He passed for 325 yards and three touchdowns in parts of two games this season.

The injury represents a big blow for Boston College (2-0) after Jurkovec passed for 2,558 yards, 17 touchdowns and five interceptions in 2020.

Dennis Grosel will start this Saturday when the Eagles visit Temple. He has completed 16 of 20 passes for 243 yards and one score this season.

Grosel filled in for an injured Jurkovec against Virginia on Dec. 5 of last season and tied the school record of 520 passing yards established by legendary Doug Flutie in 1982.

Also, kicker Aaron Boumerhi will miss the rest of the season due to a hip injury.

UK budget will not include funds for Scotland-Northern Ireland tunnel

LONDON, England: A proposed 21-mile undersea tunnel to link Scotland and Northern Ireland will not be funded, according to British ...

SEOUL, South Korea: North Korea successfully tested a new long-range cruise missile, which is thought by analysts to potentially be ...

Washington's quasi-official court stenographer, Bob Woodward, has just published another "insider" DC account, which he co-authored with the journalist and ...

INDIANAPOLIS, Indiana: Hospitals in Indiana are still reeling from the recent spurt in new Delta Covid cases across the state.According ...

Next Norway prime minster a wealthy leader of Labor Party

OSLO, Norway: The man expected to become the next prime minister of Norway, 61-year-old Jonas Gahr Stoere, was born into ...

WASHINGTON D.C.: The leaders of Australia, India, Japan and the United States will meet on 24th September to discuss issues ...

BRASILIA, Brazil: Brazil's Agriculture Ministry announced that beef imports from some Brazilian meatpackers were suspended by Saudi Arabia after the ...

Majority of Japanese companies say business to recover in 2021

TOKYO, Japan: A survey by Reuters found that most Japanese companies believe the recovery of the country's economy has reached ...

NEW YORK, New York - U.S. stocks tumbled on Friday while the U.S. dollar rallied."It was a volatile week and ...

MOUNTAIN VIEW, California: California-based Intuit, known for its small-business accounting and DIY tax-filing software, including TurboTax and QuickBooks, announced that ...

SYDNEY, NSW, Australia - Most Asian stock markets rose on Friday, however, the ASX fell sharply as the Australian market ...

Chimes at Midnight (aka Falstaff)