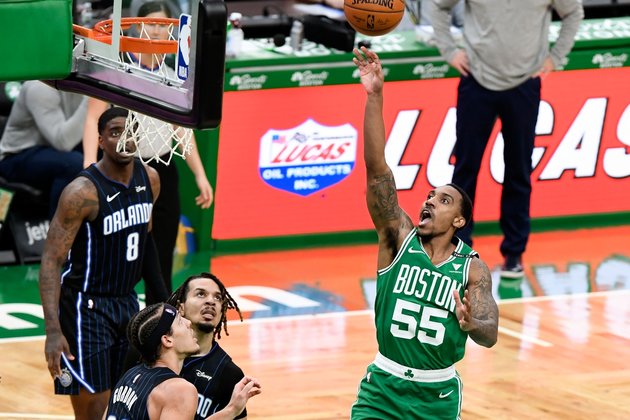 The Boston Celtics surely would have preferred to build the longest active winning streak in the Eastern Conference in a more traditional fashion.

For the New York Knicks, the longest active losing streak in the East has unfolded with an unfortunate sense of familiarity.

The Celtics look to continue getting back into the rhythm of the season and extend their winning streak on Sunday afternoon when they host the Knicks in a battle of longtime rivals.

Boston returned to action after a week-long break due to health and safety protocols Friday, when it won its fifth straight game with a 124-97 victory over the visiting Orlando Magic.

The Knicks continued skidding Friday when they dropped a 106-103 decision to the host Cleveland Cavaliers.

The return to action went as well as possible for the Celtics, who hadn't played since Jan. 8. The next three games on the schedule for Boston -- against the Miami Heat on Jan. 10, against the Chicago Bulls two days later and versus the Magic the following day -- were postponed because seven players were sidelined while waiting for the results of COVID-19 testing and contact tracing.

The Celtics woke up Friday expecting to have just the minimum eight players available, but four others were cleared to play by opening tip. All 12 players in uniform ended up playing and scoring, as Boston shook off the rust and maintained its Eastern Conference-best record by recording its most lopsided win of the season.

"We missed each other," said Celtics guard Marcus Smart, who scored 14 points and was one of six Boston players to reach double figures.

"We missed being on that court. It was a unique night where everybody that usually doesn't get to play or doesn't get much time was able to go out there and showcase their talent and showcase everything they've been working on."

The Knicks' five-game losing streak has served as a reminder of how most of their seasons have unraveled since the team last made the playoffs in 2012-13. After opening the skid with three straight double-digit losses, New York needed a game-ending 14-2 run to pull within single digits in a 116-109 loss to the Brooklyn Nets on Wednesday.

On Friday, the Knicks overcame a 12-point third-quarter deficit and led briefly in the fourth before ill-timed mistakes cost them a chance to take the lead in the waning minutes. With New York down 98-97 with 1:18 left, RJ Barrett turned the ball over and Julius Randle committed a clear path foul seconds later. The Cavaliers never led by fewer than three the rest of the way.

"It's a tough one especially, because we really played hard," said Barrett, who scored 20 points in the loss.

"It's over now. We have to learn from those little mistakes, move on and try to get a win. I think we're trying. We're all putting in the work, fighting as much as we can. I think we'll be all right."