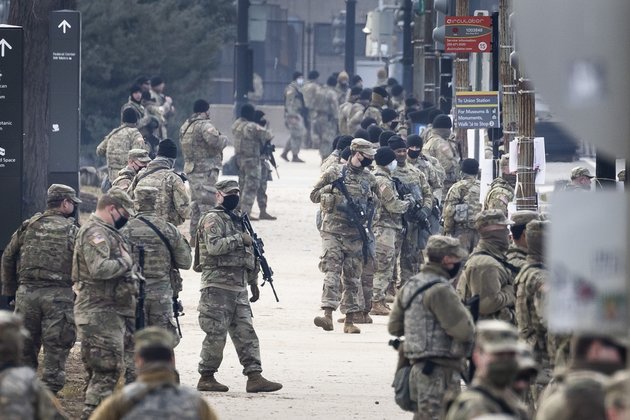 Washington DC's Capitol building has been placed under extremely tight security since supporters of Donald Trump overran its halls. Their actions forced members of congress and staff to take shelter and barricade doors. A police officer lost his life as well as four other people.

In the days that followed, thousands of armed troops were deployed in the area. This is partially because the violence at the Capitol unfolded just days before the inauguration of Joe Biden but it's unclear how many will stay in the vicinity, for how long, and how this will affect public access in the future.

The space around the White House and the Capitol Building have long been a stage for peaceful protests, such as the Moratorium to End the War in Vietnam, held in 1969. Now, the January 6 riots have jeopardised the right of the public to conduct future peaceful demonstrations.

Around the world, security measures are being tightened at government and legislative buildings. But this can clash with the principle of open democracy. The high-profile Capitol attack could result in further constraints on public access to democratic institutions at precisely the moment when faith in democracy is at a dangerously low ebb. Indeed, inflammatory rhetoric about Congress being filled with anti-democratic, untouchable "elites" was what inspired the mob in Washington in the first place.

Case studies in Canada and the UK

In Canada and the UK, attacks at parliamentary estates in 2014 and 2018 have cast long shadows. Security considerations have come to play a key role in the planned refurbishment of parliamentary buildings in both nations. The challenge has been to balance the need for security against the need for public access.

Lawmakers need to be kept safe but allowing public access to institutions like these is important. Opening up the buildings has the potential to increase trust in democratic practices and provides ordinary citizens the chance to engage more with the political processes being carried out in their name.

Our research on the Parliament Hill "rehabilitation" project in Ottawa, Canada has found that plans include an approach to security that hopes to be non-intrusive and unobservable to citizens and visitors to the parliamentary precinct. Participants we interviewed who were involved in the rebuild said they were aiming for "soft" rather "hard" approaches - think park benches that would serve as bollards rather than, say, fencing.

What proves to be a major area at risk for public accessibility in Canada, however, is the open lawn on the Hill, which serves the community both at a local and national level. It's a space for peaceful protests, seasonal light shows, or casual games of frisbee.

Experts have noted that this type of public gathering area is essential for free political expression and important for a successful democracy. As one of our Canadian MP participants noted: "We're very fortunate in Canada, where in many, many other countries of the world parliament is not even accessible".

However, proposed refurbishment plans include a new entrance that would take up significant space on the lawn, which could end up limiting public engagement. As journalist Madelaine Drohan has noted, refurbishment plans for Canada's parliament are at risk of being "a perfect example of how making legislators more secure can also make them more isolated".

In the UK, planning is underway to restore the Palace of Westminster. This is a multi-billion-pound project to refurbish the building, which is a UNESCO World Heritage site. Security considerations have been central to this planning process. A violent knife attack in 2018 that left a police officer dead has increased pressure to keep MPs safe.

Given the safety concerns, it's not feasible, for example, for a temporary House of Commons chamber to be constructed outside of the secure parliamentary estate during the renovation project, even though there have been calls for parliament to meet outside of London.

The hostile environment in which MPs are operating also demonstrates why public access to parliament is more important than ever.

A recent audit found 72% of the British public believe that the UK system of parliamentary government needs "quite a lot" or "a great deal" of improvement.

At time when the public is expressing despondency with their parliaments in many nations, it's important to encourage interactions with the spaces that holds their democracies. It is a long-honoured tradition within UK democracy, for example, that any member of the public can walk into Westminster's Central Lobby and ask to meet with their MP or watch parliamentary proceedings from the gallery.

As Washington DC repairs the literal and figurative damage done by recent events, it, too, will have to grapple with the question of public access. The armed rioters who painted themselves as defenders of democracy may just have made it harder for their fellow citizens to access their democratic institutions to assert their own rights peacefully.

WASHINGTON DC: Speaking to reporters on Sunday, Dr. Anthony Fauci said he would not hesitate to be inoculated with the ...

WASHINGTON D.C.: As preparations are underway to begin shipping Johnson and Johnson's COVID-19 vaccines this week, reports have been released ...

The winter storms that swept across the U.S., particularly Texas, upending the energy market and knocking out power for millions ...