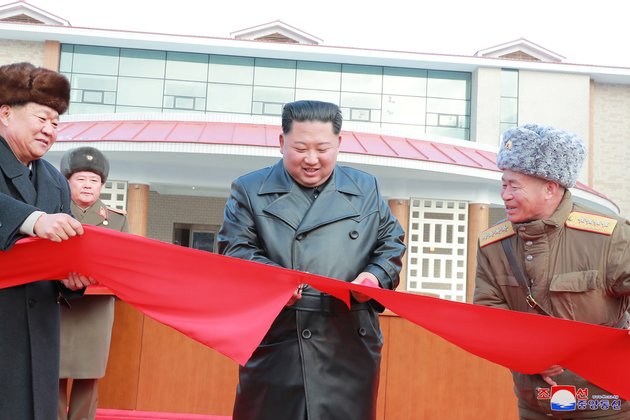 "[Kim] hardly repressed his happiness, saying that it has become possible to provide people with new culture, and one more plan of the Party to make our people enjoy high civilization under socialism as early as possible has come true," an announcer from the state-run Korean Central News Agency (KCNA) said.

The recreation center no doubt looks new, but it's a project that "has been in the works for like a decade," according to Jenny Town, a fellow at the Stimson Center and managing editor of North Korea news analysis site 38North.

"[The center's opening] is absolutely significant," Town told VOA News. "There's a real priority in the tourist sector right now, and part of that is an opportunity for North Korea. All the reports that we hear claim that there are tons of Chinese tourists coming in every day."

Tourism is one of North Korea's few industries that remains free of U.N. Security Council sanctions meant to pressure Kim to abandon the country's nuclear weapons program. But while export bans on seafood and coal are hurting the economy, North Korea still appears to be heavily investing in other tourism projects in recent months. Pyongyang's state-run newspaper recently announced a medical tourism program that would offer foreign visitors dental implants, cataract surgery and other medical procedures.

Meanwhile, inter-Korean tourism appears to be facing a setback. In October, Kim reportedly ordered the demolition of several South Korean-built hotels and tourist facilities at the Diamond Mountain Resort along the North Korean side of the border. In a KCNA report, Kim called the facilities "shabby" and said he would re-develop the resort by himself.

"Right now, it's all about being able to provide amenities other than just tours of Pyongyang to tourists," Town said.

LINGAYEN, Pangasinan, Jan. 24 (PIA) - As China is grappling to contain an outbreak of coronavirus, in the Philippipines, the ...

SYDNEY, NSW, Australia - Flags will be flown at half mast throughout New South Wales in Australia on Friday, following ...

Heads of state and government from dozens of countries arrived in Jerusalem to mark the 75th anniversary of the liberation ...

GENEVA, Switzerland (ANI/Sputnik) - The WHO Emergency Committee held a discussion on Wednesday over concerns about the coronavirus outbreak in ...

DUBLIN, Ireland - The importance of the tourism industry to Ireland has been highlighted in a report which has examined ...

SYDNEY, Australia - Shares in China dropped sharply on Friday as two populous cities in the country went into lockdown ...

Huanggang locks down over coronovirus threat

BEIJING, China - The authorities in Huanggang city in China have imposed a quarantine lockdown in a bid to stop ...